As I entered the dialysis centre at Kreta Ayer, I was greeted with a hearty hello in Teochew. I turned my head, and there was my patient for the day, Mdm Goh Cheng Kim. Mdm Goh is 71 this year and had a cheerful demeanour. As we settled down, I was excited for her to share her life story with me.

Family life started relatively early for Mdm Goh as she got married at the tender age of 19 and had her first child shortly after. Two years later, she had her second child. Her husband worked shifts as a bus driver and drew an average income. Now with 2 sons in tow, she had to work as a part-time dishwasher to supplement the family income. The family of four led an uneventful life for the next decade, until that fateful day at the doctors.

Mdm Goh recalled, “My health quickly deteriorated within a month. I was constantly vomiting and could not eat. The body aches and chills were so bad, I was wearing a woollen jacket in the afternoons. My husband thought I had offended spirits and even brought me to the temple for divine intervention!”

When Mdm Goh finally went to the doctor, she was hospitalised immediately for end-stage kidney failure. “When the doctor said I only had 5% of my kidney functions left and had to be on dialysis for life, I had no hard feelings. He told me that the life expectancy for kidney patients averages 5 years. If it was time for me to go, I will accept it.”

Mdm Goh had to stop working, and her husband became the sole breadwinner of the family. Even in the face of challenges, she maintained a positive attitude towards her condition. “I was thankful that even while being on dialysis, I was still able to able to provide for my family. Every lunch-box packed for my husband, and every pair of school shoes washed for my sons represented another day lived.”

In 1997, Mdm Goh was referred by a social worker to dialyse at the new KDF-Alexandra Hospital. While the dialysis process was straightforward, I came to learn that her journey was not. She lamented, “Initially, dialysis was difficult for me as it made me nauseous and giddy often. Even with subsidies then, my husband was forking out a few hundred each month for my treatments. We had to live frugally to afford my treatment and my children’s school fees.”

In the early days, she took on occasional cleaning stints at the hospital, mopping the ward floors to earn some extra money for the family, but stopped soon after due to health complications. Gesturing towards her covered feet, she said, “I had to amputate some toes on my two feet due to complications. It affected my balance, causing me to fall several times when I travelled to the hospital by bus for dialysis.”

In 2004, Mdm Goh was one of the first few patients to be shifted to the newly opened KDF San Wang Wu Ti Dialysis Centre at Kreta Ayer, where she has been dialysing since. With growing support from the government and donations from the public over the years, Mdm Goh was also able to qualify for fully subsidised dialysis treatments.

Under KDF’s Patient Transportation subsidy scheme, Mdm Goh is now able to travel to and from the dialysis centre by taxi at no cost. She also happily shared that she has also received a wheelchair under the scheme to ease her commuting woes.

Today, Mdm Goh’s husband has retired. Her eldest son is married and has moved out. The couple lives with their youngest son who is not married, and rely mostly on their savings, and a small allowance from both sons to get by.

With a twinkle in her eye, she pointed to a small bottle of dried tangerine peels on the table and chuckled, “My husband knows that dialysis makes me tired, so he would always pack a bottle of these to perk me up. More than 25 years of buying me these peels, not cheap you know. I always tell him not to waste money, but okay lah, just need to cook him his favourite noodles for breakfast every morning and he’s a happy man.”

Mdm Goh looks at her watch, and continued, “30 more minutes. He will be here to pick me up soon.” She offered me a peel, and I gladly took it. A myriad of flavours coursed through my tongue. Just the right amount of salty and sour flavours, ending off with a pleasant sweetness. In that moment, these flavours were the perfect analogy of Mdm Goh’s life – sharp, surprising, but satisfying at the end. 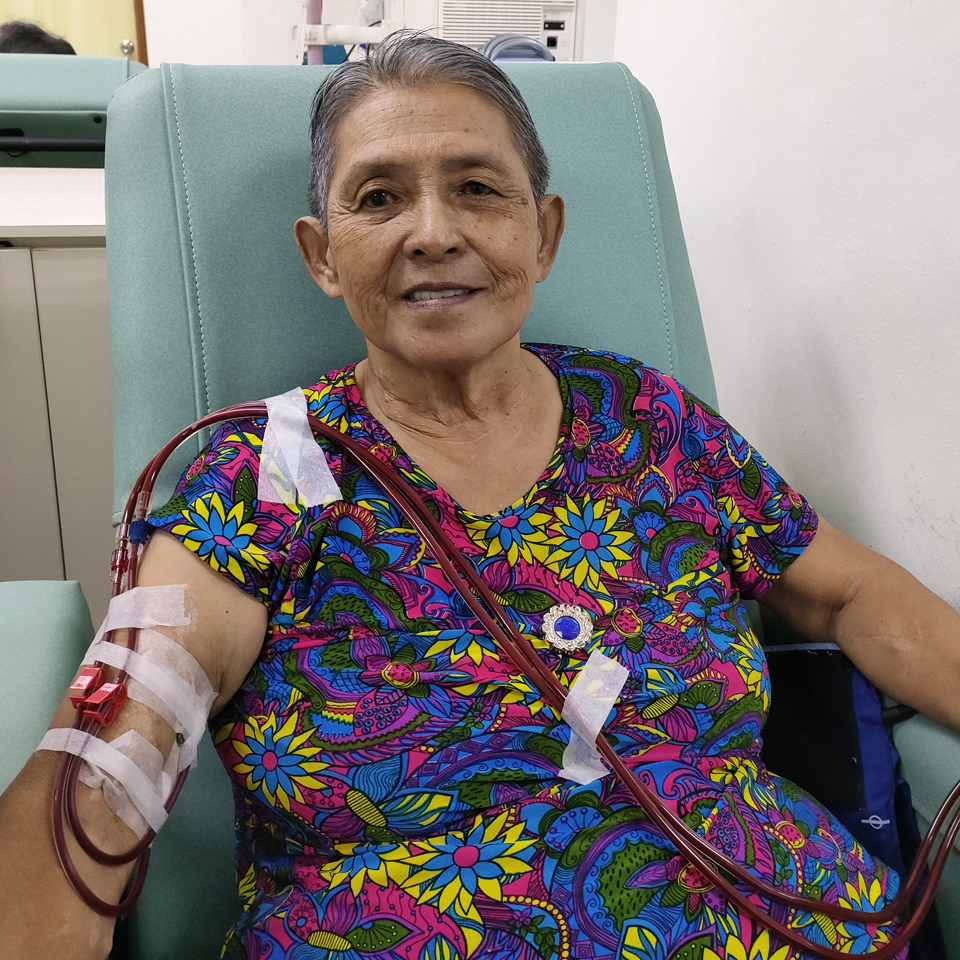